Back in November I was lucky enough to review Minutes Before Sunset by Shannon A. Thompson, a YA Paranormal Romance that puts a new twist on the battle between Dark and Light. Now I’m delighted to take part in the cover reveal for the beautiful second edition. 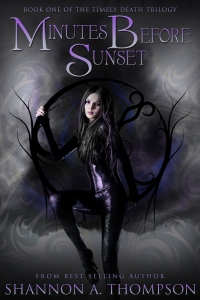 “Her kiss could kill us, and my consent signed our death certificates.”

Eric Welborn isn’t completely human, but he isn’t the only shade in the small Midwest town of Hayworth. With one year left before his eighteenth birthday, Eric is destined to win a long-raging war for his kind. But then she happens. In the middle of the night, Eric meets a nameless shade, and she’s powerful—too powerful—and his beliefs are altered. The Dark has lied to him, and he’s determined to figure out exactly what lies were told, even if the secrets protect his survival.

Jessica Taylor moves to Hayworth, and her only goal is to find more information on her deceased biological family. Her adoptive parents agree to help on one condition: perfect grades. And Jessica is distraught when she’s assigned as Eric’s class partner. He won’t help, let alone talk to her, but she’s determined to change him—even if it means revealing everything he’s strived to hide. 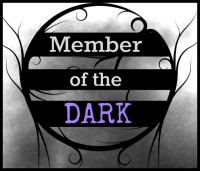 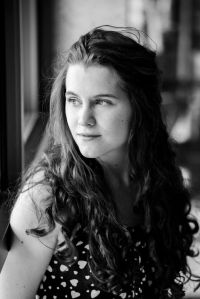 Shannon A. Thompson is a 23-year-old author, avid reader, and habitual chatterbox. She was merely 16 when she was first published, and a lot has happened since then. Thompson’s work has appeared in numerous poetry collections and anthologies, and her first installment of The Timely Death Trilogy became Goodreads Book of the Month. She is currently represented by Clean Teen Publishing, and Minutes Before Sunset releases on July 28, 2015.

As a novelist, poet, and blogger, Thompson spends her free time writing and sharing ideas with her black cat named after her favorite actor, Humphrey Bogart. Between writing and befriending cats, she graduated from the University of Kansas with a bachelor’s degree in English, and she travels whenever the road calls her.

Visit her blog for writers and readers at www.ShannonAThompson.com.